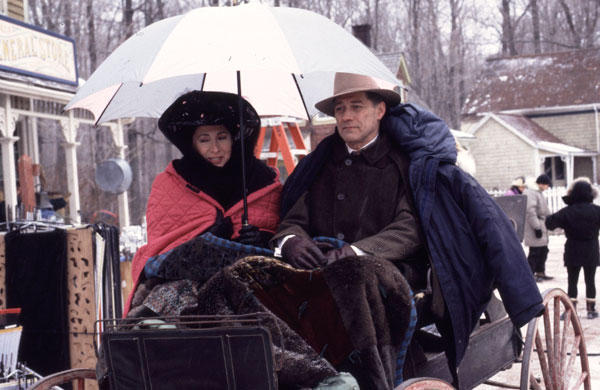 A large part of the visual appeal of Road to Avonlea is the beautiful, pastoral scenery that spans all four seasons. However, capturing all of these exterior vistas on film definitely presented some challenges while dealing with the unpredictable Southern Ontario weather.

The biggest challenge with any exterior filming is creating consistent lighting and Road to Avonlea definitely was no exception. The sun was constantly moving and being obscured by clouds, buildings, trees, etc. making lighting continuity a constant battle.  Even on sunny days, lights would have to be used to reduce hard shadows and create highlights.

The cast and crew were constantly dealing with the elements. On hot summer days, the crew would wear cooler clothes while the actors were often extremely hot in their stuffy period costumes.In the winter, the crew would dress in extremely warm clothes because they would be standing outside for hours at a time. Spring and autumn weather was extremely unpredictable and the crew had to be prepared for anything. It was very difficult to reschedule scenes, so often the crew worked rain or shine. The photo below from Evelyn is a good example. The scene originally called for a sunny day but since the weather didn't cooperate, the cast wound up playing football in the rain.

Maintaining continuity was very difficult, especially in the winter. Some days it would snow and then suddenly stop, making it impossible to match the falling snow from one shot to the next. In some cases, visual effects snow had to be added in post production to help match the continuity. Snow on the ground was also difficult to deal with because once it was walked on, it was impossible to remove the tracks. The crew was very cautious not to walk on snow that was going to appear on camera.

Keeping the actors warm and dry, and their wardrobe, hair and make up intact was also a challenge. Every effort was made to keep them sheltered and comfortable while waiting for the next shot. Filming outdoors was often challenging but the end result was always worth it. The weather presented similar challenges on other Sullivan productions like Anne of Green Gables and Wind at my Back but dealing with Mother Nature is a fact of life on all productions that don't shoot everything in a studio. The natural elements provide an authentic look and feel to any show that simply can't be replicated with visual effects. And remember, when you see an actor on Road to Avonlea that looks cold, they aren't acting trust me, they're really cold. All of your favourite Road to Avonlea episodes are available on DVD at shopatsullivan.com.