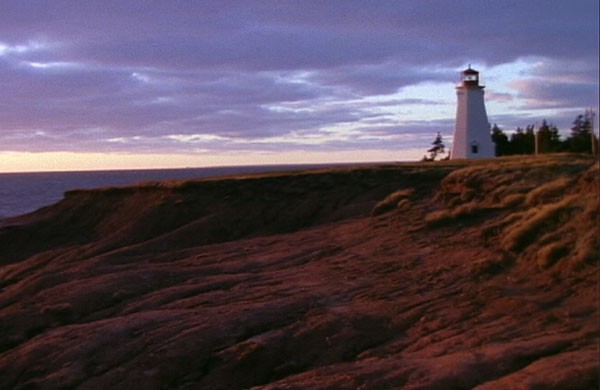 One of the most recognizable visual elements of Road to Avonlea is the lighthouse. Standing atop a cliff overlooking the ocean it served not only as Gus Pike's home but as a backdrop for many key Avonlea moments. However, what you may not know is that there were actually two lighthouses and neither one of them overlooked the ocean.

The Avonlea lighthouse actually stood on the crest of a hill in the middle of a field at the Avonlea Village Backlot near Uxbridge, Ontario with no ocean in sight. Designed to resemble The Seacow Head Lighthouse on Prince Edward Island, the Avonlea lighthouse was undoubtedly the most convincing Maritime element on the entire set. It was also the most visible since it could be seen from the public road that passed by the Avonlea Backlot. It looked so authentic that on numerous occasions confused motorists thought they were completely lost. They would come to the main gate and ask the security guard if they took a wrong turn because they weren't supposed to be near a large body of water. They were usually a bit embarrassed when they found out the truth but that soon turned to excitement when they realized they'd stumbled onto the set of Road to Avonlea

The lighthouse was built on the highest point of the Avonlea Village property because when shot from a lower point you could not see what was beyond it. What we don't see our imagination fills in from past experience, so naturally if you see a lighthouse you assume there's water nearby. As you can see from the photos below, the illusion worked quite well.

When scenes were scripted that required seeing the ocean with the lighthouse, there were a couple of options. In some cases, sequences were shot by a Second Unit Crew on P.E.I. with photo doubles. These Sequences would establish the proper setting and then the rest of the scene would be shot later with the real actors against the field and lighthouse at the Avonlea Backlot. Both photos below Second Unit shots from P.E.I:

The other option for lighthouse scenes was to use visual effects. VFX shots were quite costly and required a lot of planning, so they were only used in special cases. The shot below is an example from The Sea Ghost that used a combination of Second Unit PEI footage (cliff and ocean), footage shot on the Avonlea set (kids and lighthouse) and VFX (stormy night sky and lighthouse light):

The Sea Ghost was the first episode that featured the lighthouse and the climax was a fight scene at the top of it. Actually shooting at the top of the lighthouse would have been extremely dangerous and difficult so the solution was to shrink it. A short version of the lighthouse that was only a few feet off the ground was built to safely shoot all of the stunts. The camera was down low looking up which helped created the illusion of height as seen in the photo below:

The interior of the lighthouse at the Village was not "shootable" but it was a welcome shelter for the actors when we were shooting there in the winter. It was by far the coldest place to shoot because it was on top of a hill with nothing to block the cold winter wind. When you see winter scenes at the lighthouse the actors definitely didn't have to act cold, they were cold... and so was the crew. Thankfully, all of the interior Lighthouse scenes were shot on a set in the studio that was much more pleasant to work in.

The lighthouse was one of the most sturdily built structures at the Avonlea Village but it was also the most dangerous. Unfortunately, it had to be taken down when the show finished because it was too risky to leave it standing in case someone tried to climb it and hurt themselves. The Avonlea lighthouse may no longer stand in the field in Uxbridge but luckily it will always exist in the many Road to Avonlea scenes it gave it's distinctive, Maritime charm to. All of your favourite Road to Avonlea episodes are available on DVD at shopatsullivan.com.