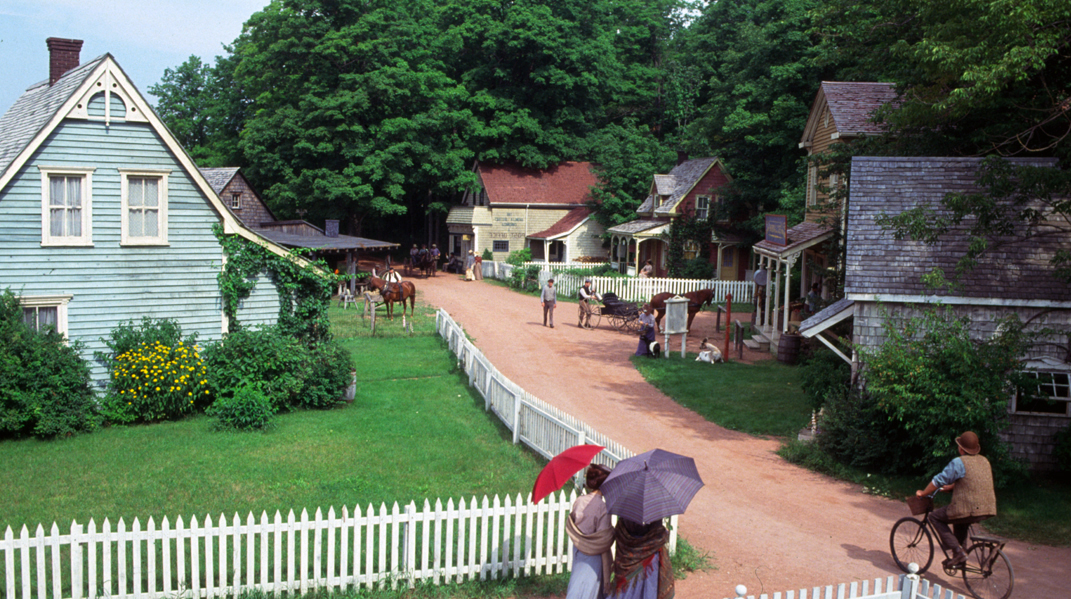 Have you ever watched Road to Avonlea, taken in the pictorial atmosphere of Avonlea and wished you could visit?

Although the fictional town of Avonlea is in the heart of Prince Edward Island, the actual locations of the filming of the beloved series are mostly in rural Ontario and visiting them can make for a great vacation (or stay-cation) if you are in the area.

Here are some of the locations that stand out:

One of the most iconic scenes of Road to Avonlea occurs in the very episode of the series, “The Journey Begins”, when Sara Stanley and her Nanny wait at the Avonlea train station to be taken to King Farm. The Jerseyville Train Station, located at Westfield Heritage Village in Rockton, Ontario was used to film this scene and if you are also a fan of Anne of Green Gables, you may recognize it as the same location where Anne sat and waited for Matthew to bring her to Green Gables.

Many a memorable scene throughout the seven seasons of Road to Avonlea has occurred at the King home. The house itself is located on Tannenbaum Farm, in Coppins Corner, Ontario. This house was also used to film the back entrance of Green Gables, in the Anne films.

One of the only big city locations to be used when filming Avonlea is the Toronto Distillery District. Originally called “The Gooderham & Warts Distillery,” the district was used in the episodes “But When She Was Bad She Was Horrid part 1 and 2” and “The Return of Gus Pike”. Sullivan also used this location for the six-part mini series, "By Way of the Stars’’ and for the warn torn streets of France and England in “Anne of Green Gables: The Continuing Story”.

More than anywhere else, Uxbridge Ontario is the site of Avonlea. For eight years, this town played host to the cast and crew of the show. It’s fields, historical buildings and houses can be seen throughout the 91 episodes, creating a scenery very reminiscent of Prince Edward Island. The majority of the sets for the show were constructed in Uxbridge, on the former Robert Nesbit Farm. These buildings, which include Rose Cottage, were taken down after the series ended but you can still visit the area and see the barn that acted as the King Farm barn for all seven seasons.

One of the most prominent and symbolic scenes in Road to Avonlea is the Avonlea lighthouse. It was always portrayed overlooking the ocean and a dear home to Gus Pike. However, this iconic stature didn't actually overlook the ocean. The Avonlea lighthouse actually stood on the crest of a hill in the middle of a field at the Avonlea Village Backlot near Uxbridge, Ontario with no ocean in sight. Designed to resemble The Seacow Head Lighthouse on Prince Edward Island, the Avonlea lighthouse was undoubtedly the most convincing Maritime element on the entire set. Read more about the shrinking lighthouse here.

If you are ever in the area, be sure to check out these locations! For more Road to Avonlea, visit Shop at Sullivan and GazeboTV!